The parish was founded in 1865, as a “church plant” from All Saints, Margaret Street, in a densely packed slum district, by Fr Richard Temple West, who was then a Curate at Margaret Street. The architect was George Edmund Street, a member of the Margaret Street congregation, and then at the height of his powers. Building started in 1867, and was complete in 1872, but a fire destroyed the brand new roof and the reconstruction took a year, so the first Mass in the new building was on St. Mary Magdalene’s Day 1873. The church was consecrated on 21st October 1878, after the decorations were finished. 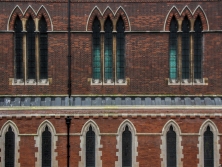 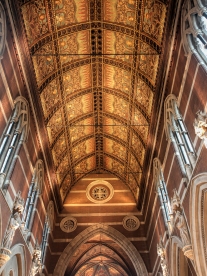 Street’s design was dictated by the site, sloping steeply from north to south and also from west to east at the back and slightly from east to west at the front, and hemmed in by terraced housing. The church is immensely high, with a needle spire, which rose above the rooftops. Clerestory windows ensured that it was light. The irregular west end abutted existing buildings, and the church occupies every inch of the available site, except for a sunken area to access the vestries. The Building Act forbade building above a certain height right up against a pavement, but allowed it five feet back, so on the north side Street built a “false” aisle, five feet wide, with the arcade carrying the church to its full height. On the south side, there is a normal, wide aisle. Under the church, to provide a level platform, is a massive crypt, including vestries at the east end. Street’s artistry was to provide a double arcade to the north aisle which takes the eye away from the proximity of the outside wall and conceals a slight curve in it. He was building the Royal Courts of Justice at the same time, and there is more than a passing resemblance between St. Mary Mag’s and the Great Hall there (also a solution to a sloping site). The decorative scheme of the church is Street’s, executed by some of the leading ecclesiastical artists of the day. The windows are all by Henry Holiday and repay careful study.

Twenty years after the building of the church, Ninian Comper was commissioned to produce a fitting memorial to Fr. West and created the Chapel of St Sepulchre in the south aisle of the crypt, his first work in London. This involved altering the crypt windows (which come up to street level on the south side) and putting in new stairs. The Chapel is a chantry chapel translated from fifteenth century Germany, with every detail perfectly designed by Comper in an elaborate scheme based on the idea of St. Mary Magdalene, the penitent, becoming the first witness of the resurrection. Comper in later years came to see this work as mechanical reproduction, but it produces an exquisite effect, with a blue vault spangled with stars and a reredos crammed with figures glittering with burnished gold. The reredos contains a concealed tabernacle (possibly the first to be installed on a Church of England altar) which took the place of Comper’s favoured hanging pyx for fear of protestant rioters. The Chapel has always been troubled by penetrating damp and needed to be restored in the 1930s and 1960s. It served as the chapel for a small house of the Wantage sisters during the years that they worked in the parish.

In the 1920s fashions had changed in “advanced” Anglo-Catholic circles, and the correct style was felt to be baroque, and so alterations were made to the church by Martin Travers, the leading designer in the style. Travers created the war memorial calvary outside the church, and the Lady Chapel inside the transept porch, an exercise in Spanish baroque, as a memorial to Fr. Bleadon, the second Vicar. Comper had produced a design for this Lady altar before the Great War, but it was never executed. Travers’ most prominent work, however, was to raise the floor of the chancel and provide an elegant marble balustrade and communion rails. The work in cream and pale green marble fits well with Street’s wall decorations though the raising of the reredos to overlap the east window is regrettable. Street had given the church a low chancel screen in delicate ironwork, which was preserved and installed in the crypt. The Mary Magdalene altar was also installed in the 1920s in the south aisle, and Travers executed a charming statue of the patron saint holding a model of the church which now stands there, but which originally stood in the south porch.

In the 1960s, the community that the church served was swept away in slum clearance after wartime bombing, and the church left marooned, looking like some vast liner moored on the canal, amid the council flats of the Warwick Estate. The crypt Chapel was restored for the centenary of the church, and the north porch was walled up, but otherwise little was done to the building.

The twenty-first century has seen the first successful efforts to restore and regenerate the building after decades of decay. The vast west window was totally repaired, re-leaded and cleaned in 2005-6. The roof was completely re-slated in 2007-8, and the rainwater goods repaired or renewed, and thanks to English Heritage the clerestory windows were entirely renewed at the same time. English Heritage also supported the provision of a safe electrical installation in the church, together with new drainage along the north wall. A long-term partnership with Paddington Development Trust has been developed, and with the support of Westminster City Council and the Archdeaconry of Charing Cross, we were able to develop a successful bid to the Heritage Lottery Fund. This has attracted other funding from many generous donors, and so we have been able to carry out an extensive programme of conservation, alongside the construction of a new extension, designed by Dow Jones Architects. We have carried out external brick and stone cleaning and repairs, repairs and cleaning to all the stained glass windows, complete refurbishment of the undercroft, high-level interior brick and stone cleaning, and the cleaning and conservation of all the painted surfaces in the nave and chancel, which are now well-lit. The HLF funding was aimed at making the church into an innovative venue for arts, education, culture and heritage, while continuing as a parish church. Together with Paddington Development Trust, who lease much of the building, we now run Grand Junction.

Further conservation work will carry on. We are still conducting scientific studies to guide our conservation of the Comper Chapel, which should start soon, and we are trying to raise money to make the tower clock operational once more.

This site uses Akismet to reduce spam. Learn how your comment data is processed.